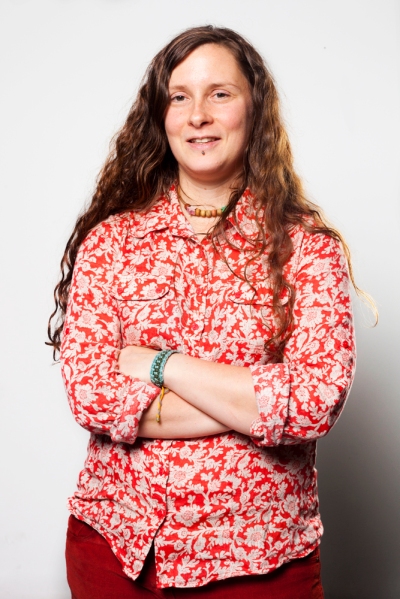 When I asked Jo Bywater on Facebook if she was ok to come into the studio today, she answered in Yoda-ese “ready am I,” which I assume was nothing more than a typo, but it spawned a series of Yoda puns on her wall, culminating in, “the force must you use, young Bywater!” (which is quite witty for me actually). But if there is such a thing as “the force” and it can be used by musicians, then singer-songwriter and music teacher Jo Bywater has it in spades. She lives and breathes her music, it’s not a hobby for her, it’s her life. I’ve watched her solo performances and have found myself wondering more than once, how on earth does she get the guitar to do that?

Yorkshire lass Jo has been in Liverpool about 12 years now. She came here originally to complete her degree in music at the Liverpool Institute for Performing Arts, and, like many graduates, fell in love with Liverpool, and stayed. “I was gigging in Liverpool as a student and just loved the music scene here,” she says, “and it’s getting better all the time. One of the strengths is that there is so much variety and there is room for every musical genre and taste.”

The story of her finding music as a child is similar to stories that many rock musicians tell – some classical training at school, discovering an affinity with music, and finding their own musical direction in late teenage years. “I dabbled in violin and recorder at school,” she remembers, “but didn’t really enjoy them, and then I took up classical guitar at the age of 15. I found classical guitar a bit regimented and rigid I suppose, so I took up electric guitar and started learning Nirvana songs. Then I was off!” she smiles at the memory, “I was lead guitarist in a metal band when I was 18, we performed in the 6th Form common room first, and then spent a good couple of years gigging around.” She has now moved on from metal bands and has been performing as a solo artist for about 8 years. She also released her own solo album “Cycle Grace Pulse Break” in 2010, which continues to sell respectably well.

These days Jo is a music teacher with a studio at her home in Toxteth where she gives private lessons, and in her spare time she writes, records and performs. “Music is everything I do,” she tells us, “I love teaching, I teach such a range of ages from primary school children right up to people in their 60s taking up music in retirement.”

She feels that teaching music has helped her solo musical style to develop and mellow, and she contends that her knowledge of musical theory and classical training has helped to open her mind to all kinds of genres and styles of music. As a former lead guitarist she still has a love of bluesy guitar styles like Jimi Hendrix and numerous others, though she appreciates a wide range of songwriters, Billy Joel, Stevie Wonder and Neil Young among her favourites. But she doesn’t write anything off and tries to enjoy everything that’s out there, though with her teacher’s ear she can’t help but find fault with some of the commercially produced dross which is constantly beamed at us. But Jo doesn’t just say, “oh that’s crap!” like a lot of people do, she can provide thoughtful and structured critiques about why it’s crap – this girl knows absolutely what she is talking about!

We asked Jo a few more questions. To be truthful you could write a much longer piece about her and her views and opinions, but here are the edited highlights.

Q. What have you done today?

A. I’ve started filming a documentary advertisement at home in my flat for my new EP, which comes out soon. I’m doing a launch at the View Two Gallery in Mathew Street on 27th September with Liverpool Acoustic, which is all really exciting stuff.

Q. Which are your favourite Liverpool music venues?

A. I like playing all venues, from someone’s living room to festivals, but I think the Lomax and Mello Mello are very special. They are small enough to be intimate places and they have plenty of character and tend to attract crowds. But I also love the View Two Gallery, there is something very unique about performing upstairs at an art gallery!

Q. Tell us about your song “Wave” on the album, what’s it about? Where did the inspiration come from?

A. I wrote most of that song in about half hour, which is unusual for me actually, they usually take much longer. I was with a good friend on New Year’s Eve and it’s been a tradition for the last few years that we name the new year after something. That particular year we named the “year of fulfilment”, and the first line in “Wave” is “A wave of fulfilment.” It’s a song about cycles, how things come around and go around.

Q. How does your song writing process normally work? Typically how long does it take you to write a song?

A. They don’t usually happen as quickly as “Wave” did. Songs need to be cooked for a while in my opinion, although you can come up with a good idea very quickly, you need to let it simmer for while, sit on it, tweak it, play around with it. I can’t force a song, I’m too fussy and I have to be patient and let it grow before I can consider it as finished.

Q. Do you ever work with other musicians when recording or performing? Are there any musicians you’d like to work with?

A. I’ve played with bands and with other musicians all my life. I’ve got some friends giving guest performances on my EP and they will be playing with me at the launch. I think as a songwriter when you work with other musicians you have to be quite strong to keep the song true to what you intended, but you also want to give the other musicians enough latitude so that you can make good use of their creative talents. It’s always a balancing act.

Q. Musically, what is your proudest moment ever?

A. Getting my album together a couple of years ago. It felt like such an achievement and it’s still something of which I am really proud.

Q. How do you feel about performing a song? Do you ever feel nervous about revealing yourself to the world?

A. Yes, every single time! The first few times I play them I can feel really self conscious, but eventually the song gets its own life and I can concentrate more on the performance than on the context of the song.

Jo’s song “Wave” features on the K’s Choice City of Music 2013 compilation album as track 9 on disc 2 and it is also on her 2010 solo album “Cycle Grace Pulse Break”.

Find out more about Jo Bywater and links to her other work at http://www.jobywater.com/

Get a copy of the K’s Choice City of Music 2013 compilation album here.